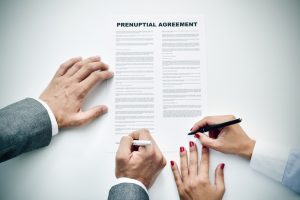 How Prenuptial Agreements Protect Your Assets

A marriage is a lifelong commitment between two people who are looking to navigate their lives together. During the course of a marriage, it isn’t uncommon to start a business, have children or experience other major life events. If the marriage ends, it could result in protracted battles over who gets assets or gets custody of the kids. It could also have major ramifications for a person’s estate plan, which can be dealt with proactively by creating a prenuptial agreement.

Are You Bringing Assets Into a Marriage?

Do You Have Beneficiaries in Mind?

Let’s say that you have a child from another marriage to whom you want to transfer your home. Without an agreement stating otherwise, it may go to the surviving spouse upon your death. This is because a spouse generally gets any assets that the other leaves behind. A prenuptial agreement can contain language stating that your future husband or wife waives the right to inherit certain assets in favor of your preferred beneficiary. An estate planning attorney in Las Vegas may be able to help review beneficiary designations with you.

Agreements Can Be Reached After the Wedding as Well

Use the form below to send us an email. A representative will call you back within 24 business hours.

Our law firm specializes in the following:

We'd love to meet you in person! Walk-in appointments are available. Please give us a call at 702-463-8700 to set up an appointment.

Our office is conveniently located at:

We also make house calls, so we can come to you to discuss your needs.

Notice to the Public: Nothing contained on this Web site or communicated through it by any means, including e-mail, by the prospective client, will create an attorney-client relationship.
Neither the State Bar of Nevada nor any agency of the State Bar has certified any lawyer as a specialist or as an expert.
Anyone considering a lawyer should independently investigate the lawyer's credentials and ability.